The Vertex data point everyone will be gawking at: a 10 percentage point improvement, adjusted for placebo, in FEV1, an important measure of lung capacity. This significant gain was reported forCRAIG F. WALKER/THE BOSTON GLOBE all three tripl 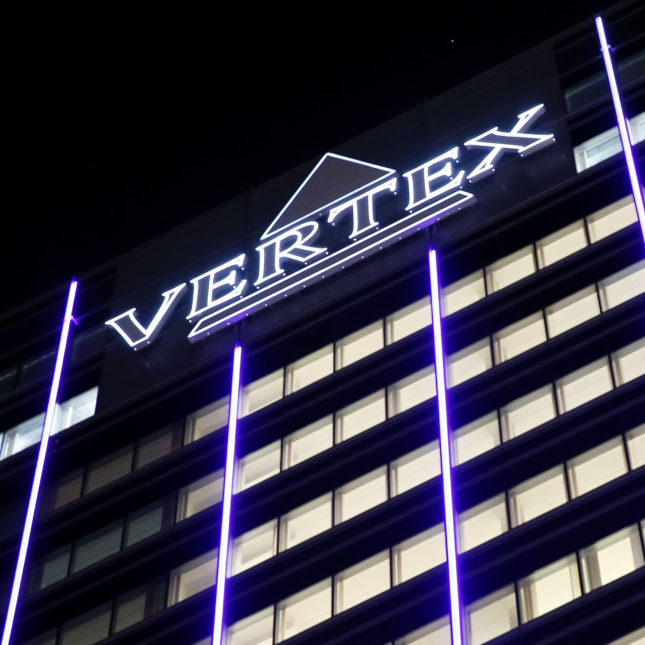 e-drug regimens being tested. The patients enrolled in the three studies have cystic fibrosis caused by a genetic mutation known as F508del/Min, which renders them among the hardest to treat.

“This is life-changing for these patients,” said Vertex CEO Jeff Leiden.

“We have Kalydeco patients that call to tell us that they used to only be able to walk one block, but now they can run several miles, or they couldn’t walk up the stairs to their apartment and now they just run up and down those stairs every day,” he said.

With two approved medicines and a third poised for approval next year, Vertex can already successfully treat the underlying cause of cystic fibrosis in roughly half of the 75,000 patients worldwide. That figure will jump to 90 percent when the three-drug regimens are on the market. An estimated 24,000 cystic fibrosis patients carry the F508del/Min genetic mutation.

Vertex will need to conduct larger clinical trials to confirm the benefits of its triple drug regimens. It’s seeking to expedite them, in hopes of getting the drugs on the market faster.

Vertex’s cystic fibrosis revenue, forecast to reach more than $2 billion this year, could nearly triple to as high as $5 billion to $6 billion.

Vertex shares have already gained 75 percent year to date, closing at about $130 a share on Tuesday. Some investors quibble with the company’s $32 billion market value, but its dominant position in cystic fibrosis — cemented with the new data — makes it an even more attractive takeover target.

The company will likely also continue to be a target of criticism for the price of its drugs.

Kalydeco lists at more than $300,000 per year. Orkambi, another Vertex cystic fibrosis drug, costs $270,000 per year. If the triple combinations are approved and priced similarly, concerns about the high cost of care will multiply, said Dr. David Cornfield, a professor and pediatric pulmonologist at the Lucile Salter Packard Children’s Hospital at Stanford University.

“You cannot argue that these drugs are not effective. The study results are powerful. But you sure can argue that their cost is maximizing profit at the expense of virtually everyone in American health care,” he said.

The new Vertex drugs, VX-440, VX-152, and VX-659, are described as “correctors” because they’re designed to fix a protein that malfunctions in cystic fibrosis patients. Vertex deploys these drugs on top of a backbone consisting of tezacaftor (another corrector) plus ivacaftor, which boosts the corrected protein and is already approved under the brand name Kalydeco.

Vertex’s third corrector, VX-659, also showed a 10 percentage-point boost in lung function as part of its own triple combination regimen, albeit in a smaller and earlier Phase 1 study.

“You cannot argue that these drugs are not effective. The study results are powerful. But you sure can argue that their cost is maximizing profit at the expense of virtually everyone in American health care.”

On safety, all three corrector drugs were linked mostly with mild to moderate side effects and few patients discontinued the studies, Vertex said. Two patients treated with VX-440 reported high levels of liver enzymes, a marker for potential organ toxicity, but both cases resolved when the drugs were discontinued.

“The benefit seen here is substantial,” said Dr. Steve Rowe, director of the Gregory Fleming James Cystic Fibrosis Research Center at the University of Alabama, Birmingham. “That we have similar results across three different molecules adds confidence to the overall data package.” Rowe is an outside consultant to Vertex who has participated as an investigator in the company’s previous clinical trials.

The company plans to pick one, possibly two, of the drugs to move into Phase 3 studies that will start early next year.

The design, and, most importantly, length of those studies are still being hashed out between Vertex and regulators, CEO Leiden said.

Rowe, Vertex’s consultant, believes regulators could be amenable to shorter clinical trials lasting six months instead of the typical 12 months, given the strength of the new corrector data and the comfort they have with the company’s already-approved cystic fibrosis drugs.

Moving fast is important because Vertex is fending off competition from other developers of cystic fibrosis drugs, including the Belgian biotech Galapagos, which is working with partner AbbVie on their own triple combination regimens.

Meantime, Vertex submitted the tezacaftor/ivacaftor combination to the FDA at the end of June with a companion submission to European regulators coming in the current quarter. If approved, tezacaftor/ivacaftor will treat cystic fibrosis patients with two copies of the F508del mutation.

Vertex already markets Orkambi to treat these patients, although the drug has modest efficacy and tolerability issues that have pinched sales. The company believes “tez/iva,” once approved, could be used by approximately 40 percent of the roughly 35,000 patients with two copies of the F508del mutation that are not being treated with Orkambi.